History of the Wiarda family association 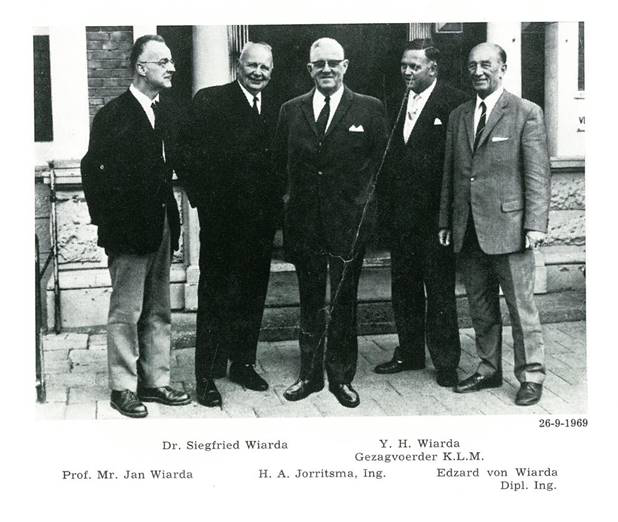 In the beginning of the 19th century it looked as though the East Frisian (German) branch of the Wiarda family would gradually come to an end, as historian Tileman, Dothias Wiarda only had one daughter and his younger brother Georg, Jacob only one son. The latter had nine children, of which four surviving sons, who were the founders of three, partly large families, who in the course of several generations extended to a considerable number of Wiarda sons and daughters. 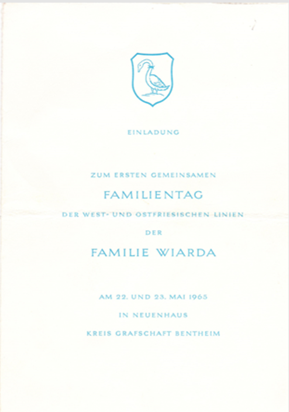 Partly due to active support from Rixa von Wiarda (Edzard’s cousin) , Siegfried Wiarda and Edzard von Wiarda went to work. They collected as many addresses as possible from family members in Germany and the Netherlands, after which they organized the first Wiarda family day. After the draft regulations of the association were prepared, the first family day took place on May 22 and 23, 1965 in Neuenhaus, Germany, the residence of Siegfried Wiarda. This place was chosen because of the favourable location in relation to the Dutch family members. A total of 85 members of the family came to the family day. The association was founded on May 22, 1965. The regulations were established and approved. The board was then elected. After the family representatives or branch elders were also appointed, the association was ready to go to work.

According to the regulations, the bearers of the name Wiarda or von Wiarda, who believe that they belong to the offspring of the potestaat (Frisian army commander => title from Charles the Great) Siurt Wiarda, just like their daughters - even after their marriage - can join the association as normal members. According to the rules, the family association wants to strengthen the bond of common descent and to arouse interest in the next generation for their special origins dating back to the Middle Ages. In addition to promoting personal contact between members of the association, knowledge about former family members will be expanded and that about their descendants will be constantly supplemented. This will happen through the following activities:

The publication of the Wiarda Announcements at least once a year. This function will be taken over in 2020 by a newsletter from the website.

Additions to the family archive.

Cooperation of the representatives of the individual family branches, the so-called Branch Elders (m / f).

It is not possible for the board to maintain contact with each member individually. Yet this contact is of great importance for the cohesion of the family. Therefore, according to the regulations, the individual family branches must each appoint a family representative or branch elder. His task is to maintain contact with all members of his family branch, to promote research into the history of his own family within this branch and to support the board in his work.

The very first board (22-05-1965) of the association consisted of the following people:

The following were elected Takoud elders of the 7 family branches:

And then appeared in the early 60s Onkel Siegfried from Neuenhaus ...

Suddenly many Wiardas turned out to be alive, in Germany, the Netherlands and many other countries as far as America and Australia.

Unearthed from archives by Siegfried Wiarda [branch II-IX [2-9]] and close relatives as well as archival and genealogical experts approached by him and suddenly the idea came to inquire whether it would be a nice idea that the Wiarda’s of all countries should gather.

And so it happened. The first time at Uncle Siegfried's home, where the Wiarda Family Association was founded and at Jan's instigation it was decided to publish a book about the fortunes of the Wiarda family from 1369, the year in which the name Wiarda first appeared in an official Certificate was mentioned.

Incidentally, this mention was due to a tort rather than a heroic act by our oldest namesakes: in a judgment of April 30, 1369, the Grietmen of the district of Winninge ruled that Wiarda's people had imprisoned a number of Frisian citizens without reason and that these should be released.

Siegfried started production and editing of the book Wiarda 1369-1969. With his dedication, vigour and persuasion, he was able to persuade many family members and other involved parties to contribute to the book, not only about persons and faits divers of various family history, but also about the family's relationship with the province of Friesland and in those regions in East Frisia [Germany], where the Wiardas had played an important role over the centuries.

In addition, a family tree was composed by Siegfried and Mr Hyltje Jorritsma from Leeuwarden, an enthusiastic genealogist in his spare time and with input from many others. For the sake of clarity, the entire personal register of all Wiarda’s was divided into bite-sized chapters - Branches - and the Branch Elders made their entrance, which were supposed to warm and keep their members updated and interested for the family. To this end they also met periodically

I remember a meeting of the first Elders at our home in Groningen, including:

The rest is history: the book was published in 1969 at the celebration of the 600th anniversary of the Family in Leeuwarden, triennial reunions followed and in 2019 almost a hundred Wiarda’s from all over the world came to Goutum, on the site of the former Wiarda State, gathered to commemorate the 650th anniversary.

There it was also decided to set up a website to store all the Wiarda information for eternity [well, for a long time].

Those Greetmen could not have foreseen that in 1369 ...